Update 15th December 2022: Noticed my own 3 star review has disappeared from their Google listing. Shows for me when I’m logged in but not when logged out. Had contacted Google to give them a chance to explain, however they have failed to do so in a reasonable time frame. The matter has now been referred to the Commerce Commission.

Update 10th January 2023: Google have allowed only a short and extremely terse version of my review to appear, and is frankly absolutely useless to any prospective patient.

Personal opinion only as a once-off patient. Self referred to Noble Dental Remuera back in October 2021 for an initial consultation only as part of a wider search for a new dentist after the clinic I used to attend closed down. All Noble Dental personnel appeared to be reasonably friendly and professional throughout the consultation.

While I acknowledge my dental health certainly isn’t in the best state it could be, came away feeling they made it out to be in a pretty bad way overall along with them verbally suggesting that any treatment they undertake for me would be “a gamble”. Other dental clinics I attended (as part of a search for a new dentist to frequent) did make mention of gum issues, but framed it more as a cautionary observation in which to keep watch on as opposed to warranting utmost alarm. In fact, I believe Noble Dental provided the most dire prognosis out of the Dental Clinics I had consulted.

I acknowledge Noble dental are seemingly regarded highly as specialists in this area and they are perhaps more particular in any assessment they make. Though will admit was at least a little taken back by overhearing behind the partition that 5 teeth (despite being free of decay and tested as “vital” apart from one root canaled one) have poor prognoses and would likely end up needing extraction. This appeared contrary to the impression I got when I originally read Noble Dental’s website where they state “We use minimally invasive, advanced technology in gum treatments to save teeth even in advanced cases of gum disease.”

Asked for a copy of the clinical notes during the consultation to be sent to me directly (as I had self referred) to which Noble agreed to do, though did have to chase them up a number of times. These were eventually supplied to me after a month with to their credit a profuse apology for their delay.

As a side note, two other reviews coincidentally or otherwise were originally found linked to an individual offering “Public relations for local dentists” and who I firmly maintain feel should have made disclosures of this potential conflict of interest upfront in his reviews. Upon accepting the PR person’s offer to let me sight his invoices to support his claim that his dealings with Noble were genuinely and strictly 100% patient/dentist, the individual back pedals with a curious story declining to do so along with his reviews disappearing.

Paid $490 for the initial consultation and Full Mouth X-ray which appears to be inline with what other periodontists in Auckland charge. Quoted around $7,000 for treatment which includes quadrant cleaning and perioscopy which I have decided not to go ahead with.

Have since settled into using another dental practice for regular routine treatment and ongoing monitoring of periodontal condition. That said, I wish to stress that this review is my personal opinion for the initial consultation only and does not in any way reflect or refer to the quality of Noble Dental’s treatments nor is this intended to throw shade on Noble or their expertise.

In an apparent attempt to explain the link of some of their reviews to a Public Relations entity, Noble Dental has replied with… 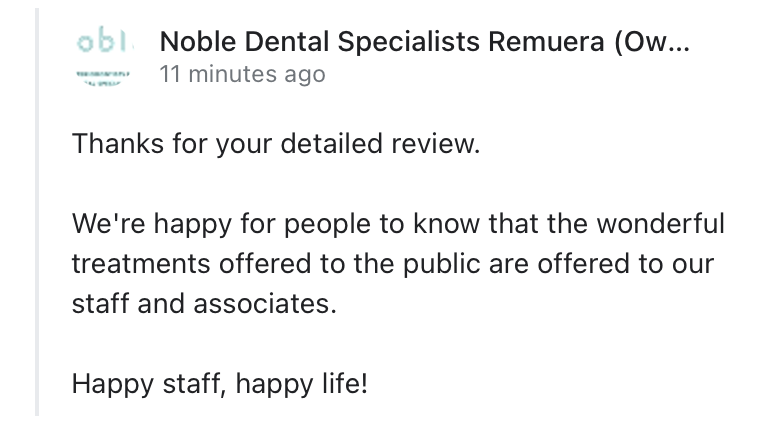