Trying to update my Skype Account using their Web Interface… Changed my primary Email address from my Gmail one to my “young.zone” Email address and received this Gem upon typing in my password and clicking “Enter”… 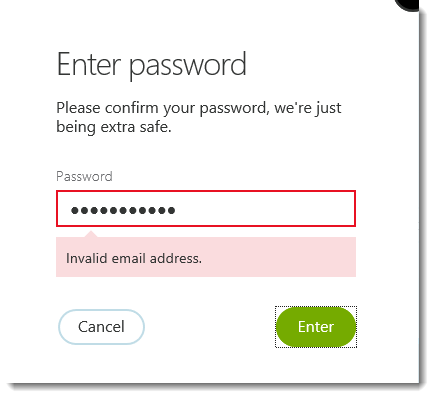 The line of thought that popped in my head “Of course, it’s invalid Email address because it isn’t a blooming Email address!!”

After much time spent prodding around, turns out it doesn’t like domain email addresses ending in “.zone”, But who would have known from the above dialog?

The Original piece appeared to come from here http://www.math.psu.edu/tseng/progcycle.html

3. Programmer fixes 10 of the bugs and explains to the testing department that the other 10 aren’t really bugs.

6. Due to marketing pressure and an extremely premature product announcement based on overly-optimistic programming schedule, the product is released.

8. Original programmer, having cashed his royalty check, is nowhere to be found.

9. Newly-assembled programming team fixes almost all of the 137 bugs, but introduce 456 new ones.

11. Company is bought in a hostile takeover by competitor using profits from their latest release, which had 783 bugs.

12. New CEO is brought in by board of directors. He hires a programmer to redo program from scratch.

Too close to reality