I will declare that I’m only a mere (curious) member of joe public, with little in the way of any Urban planning experience, however, with so much controversy over bus lane enforcement, Retro-fitting light rail, and removal of on-street parking in Auckland. An idea that came to my mind is…

It’s just I see so much opposition to the current aims of Auckland Transport and Greater Auckland (Advocacy organization) and their plans extolled frankly on paper just seems so disruptive and unsettling to people’s existing living arrangements and livelihoods. To boot, the risks of retrofitting new initiatives to existing established neighbourhoods such as light rail just seem fraught with huge cost over-runs as we’ve seen with the Auckland City Rail Link (or Loop) depending on what they call it these days.

I’ve sent the Greater Auckland blog people the above idea via their contact form with them hopefully coming back to me for my own edification as a member of the public with their feedback along with their rebuttals of why they feel the general idea is not better than their current aspirations. Currently awaiting their response.

With this idea penned, I totally understand there will undoubtably be cons to my idea above and I invite people who may be more versed in urban planning than I, to actually come and “roast this post” as it were and present some arguments against the idea (road blocks and problems) which I’ve undoubtably missed.

I will be direct, the General Feeling I get from reading the Greater Auckland (“GA”) blog is that they aren’t quite managing to “read the room”. While I can understand they want to do “good”, I do not feel they are quite connecting with or otherwise effectively communicating their vision to the General Auckland public

I did know the main editor of Greater Auckland blog, Matt Lowrie personally, but only for a brief moment during the ‘The Campaign for Better Transport’ days. Great guy, but admittedly, don’t agree with a lot of his and his cohorts’ more recent view points.

While I understand they appear to acting with good intent, I don’t believe they are going about things the right way and appear to be pushing more ideological aspects (what “They” themselves want to see) rather than the practical aspects (that would bring the most utility to the general public)

Was contemplating compiling a map myself of Auckland’s Bus Lane network, but it looks like Auckland Transport themselves have already created a Bus Lane and Special Vehicle lane map, albeit, one that is a bit out of date. (Will press Auckland Transport to update it,  particularly Queen Street and Mount Willington Highway). 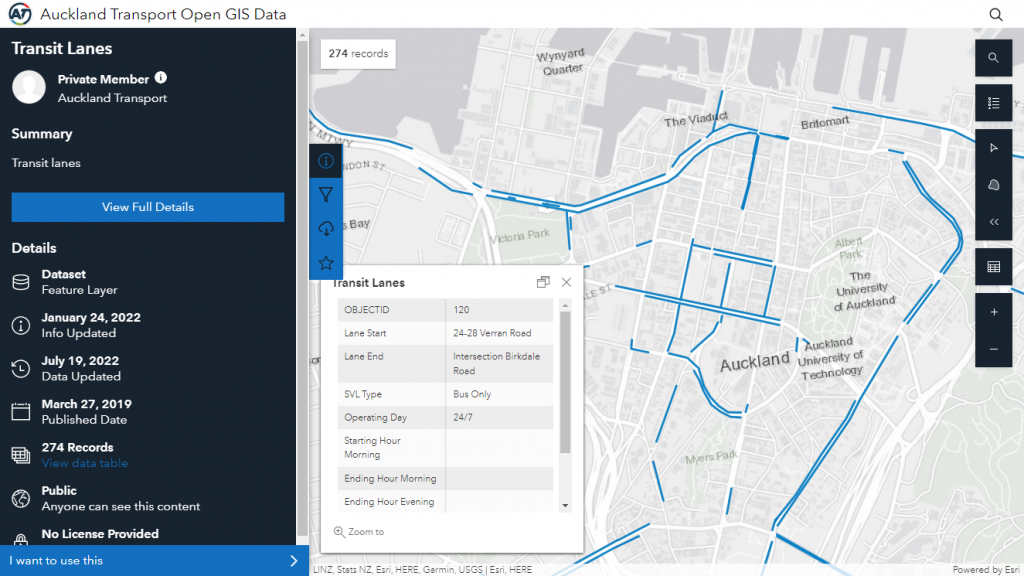 Given the phelora of Bus Lanes and Special Vehicle Lanes popping up in Auckland recently catching many otherwise law abiding people unaware, I feel it has come to the point where motorists in all practical intents and purposes now have to consult this prior to heading out in order to avoid running foul of the rules and ending up with a $150 NZD fine.

As a personal opinion, while the “Green team” (being environmental activitists, cycling + PT advocates, etc) seem to be the one’s advocating heavy handed (Orweillien-like) enforcement in the name of a climate emergency, they run the real of risk of acting tyrants themselves. As an aside, It’s almost like they are demanding that people immediately put both their livelihoods and current living arrangements on hold and comply with their demands on issues such as climate change and the environment (as in, stop driving our Internal Combustion Engine powered vehicles right away).

The issue I have with the current level of bus lane camera enforcement is that it pits Auckland Transport (as a CCO) against the very public they are supposed to be serving fostering a rather divisive and counter productive “Us” vs “Them” sentiment along with contributing to the general public’s erosion of respect towards Authority.

Furthermore, the fact that so many otherwise Law abiding people are getting pinged over an ever increasing array of ‘Strict Liability’ offences now suggests people who otherwise have the best intentions are now no longer able to go about their lives without worrying about the the state coming down on them for an innocent mistake.

While I’ve never received an infringement from AT for anything i’ve done, I will admit, I feel very strongly about how Auckland Transport are currently handling this and feel their current stance is highly corrosive to their own public image and is actually causing the general public to turn against Auckland Transport and their initiatives. I am currently locked in ongoing discussions with Auckland Transport about their conduct, as a civic concern, urging them to reconisder their approach and offering suggestions as to what they could do instead to improve public guidance, and education in order to aid compliance around bus lanes.

While I can totally understand sitting on a bus that has been impeded by cars is a frustrating and irritating experience, comments online that I’ve seen from advocates directed against general motoring members of the public that happen to unintentionally drive into a bus lane I feel is completely unhelpful, divisive and unproductive. Statements such as “Selfish Idiot” and “It’s SOOOOO simple, just stay out of the bus lane” reeks of a total lack of both consideration for others and understanding of the situation.

Auckland Transport and the “Green team” (including the likes of the ‘Greater Auckland / Transport Blog‘ people) need to be “reading the room”, they need to realize they need the support and understanding of the public in order to progress with their vision of achieving a transportation modal shift in Auckland.

In light of Auckland Transport’s announcement regarding removing of kerbside parking, it’s probably worth highlighting Auckland Transport’s (AT’s) current ethos has effectively been to discourage car use in favour of alternative transport modes in order to achieve their various visions and goals, including…

While I am certainly and staunchly in favour of developing and rolling out accessible alternative transport options in Auckland, particularly in areas currently beset with high levels of car dependency, it appears from all intents and purposes in order to achieve the aims as listed in the bullet points above, Auckland Transport have declared all out war against the private motor car and the motoring public. While I can see where AT are trying to head, they’re choosing to run roughshod over people’s current living arrangement and applying the ‘stick’ in the hope of encouraging modal shift by way of making private motor vehicle use such a hassle so much so that Auckland commuters will hopefully shift to other modes such as walking, cycling and public transport. END_OF_DOCUMENT_TOKEN_TO_BE_REPLACED

Commentary: Auckland Transport’s war against the private motor car and the motoring public.