This change includes some of their network of sub-franchisees throughout Australia including, Lawrence Vic Pty Ltd and Pacific Automotive Holdings Pty Ltd which have followed their franchisor to rebrand as Sixt Car Rental Australia, while some other now former franchisees have either stayed on as Thrifty, changed over to other car rental brands or are in the process of establishing their own independent car rental brand.

Whether there will be any real material operational change with SIXT Australia (from how they usually did things under the Thrifty brand) or whether it’s essentially just a brand change (in the form of “same pig different lip stick”) remains to be seen. It is sincerely hoped that certain franchisees will take this opportunity of a clean slate in which to substantially improve their conduct and move on from some of their former practices (Including charging of fees outside of the written legal documentation and deliberately trying to deceive customers such as myself through the posting of multiple false testimonials pretending to be happy customers).

Update 7 December 2021: Lawrence Vic Pty Ltd (formerly Thrifty Car and Truck Rental Victoria now trading as SIXT Car Rental Vic & SA) have since kindly refunded me the admin fees earlier this year that were originally charged outside of the written agreement and which originally triggered off my indignation. Many of the fake reviews posted while they were trading as Thrifty have since been promptly deleted upon separately advising the matter had been turned over to the ACCC and Consumer Affairs Victoria for comment.

Had also fielded the occasional E-mail from those identifying themselves as past employees of Lawrence Vic Pty Ltd, describing Working Conditions, Pay and Internal Culture issues, etc. though these have since tailed off as Lawrence Vic Pty Ltd followed their franchisor to rebrand as SIXT Car Rental Australia.

It is however sincerely hoped that under their new banner as SIXT Australia, Lawrence Vic Pty Ltd will take this clean slate as an opportunity to continue to substantially improve on their business conduct and practices going forward.

Will leave this post up as is, as purely a historical snapshot / record of perhaps my single most unusual consumer experience I’ve ever had either side of the Tasman and the first and so far only time I’ve ever had to initiate formal action under any given country’s Consumer Protection Framework anywhere in the world. It should however be understood much of this post may no longer be current particularly the bit about planning to take them to VCAT upon my return visit to Australia.

Also came across this… Known employees (confirmed upon glancing at their profiles) including the owner of Lawrence Vic Pty Ltd are seen posting fake ratings and reviews for Thrifty Vehicle Sales location (Since renamed simply to “Direct Vehicle Warehouse” as of December 2021) that they operate in Dandenong. (These have since been removed in haste upon advising I have turned the matter over to the ACCC and Consumer Affairs Victoria)

More Lawrence Vic Pty Ltd staff posting positive reviews, this time for Thrifty Weipa. (While this may be a different business unit to Lawrence Vic Pty Ltd, they are still part of the Australian Thrifty Car Rental network and any such review should disclose this) 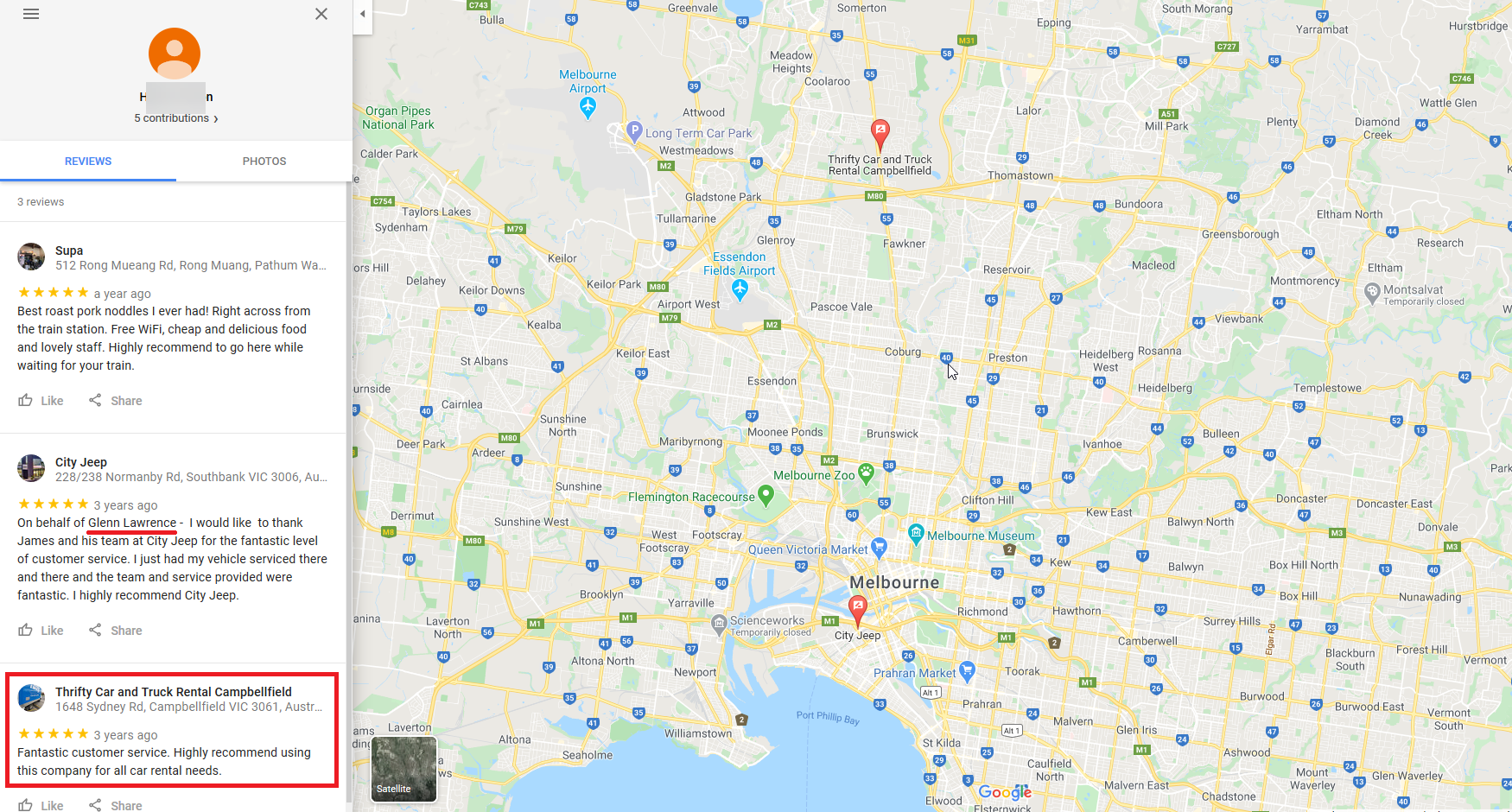 There are a few further individuals who if you Google their name present results to their LinkedIn profiles indicating they work for Thrifty. Whether they are the same people who posted these (in my view) rather anomalous, “written like an advert” review for Thrifty Vehicle Sales Dandenong is not able to be definitively confirmed as there are a ton of People in the Melbourne Area with the same (first and last) names, Never the less, the prose is very unlike a customer would normally write and combined with a match to Linkedin, these reviews I feel should be viewed with a high degree of skepticism. 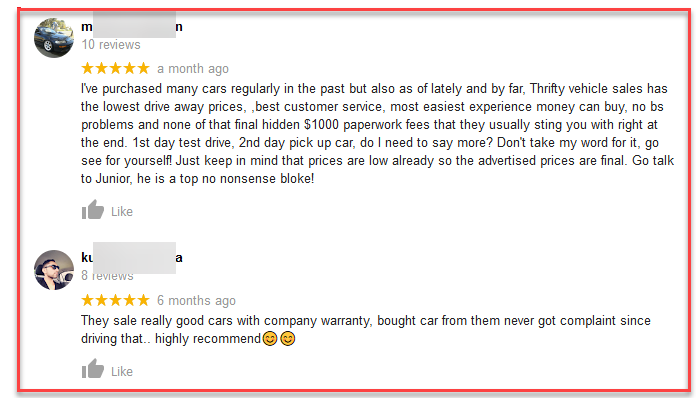